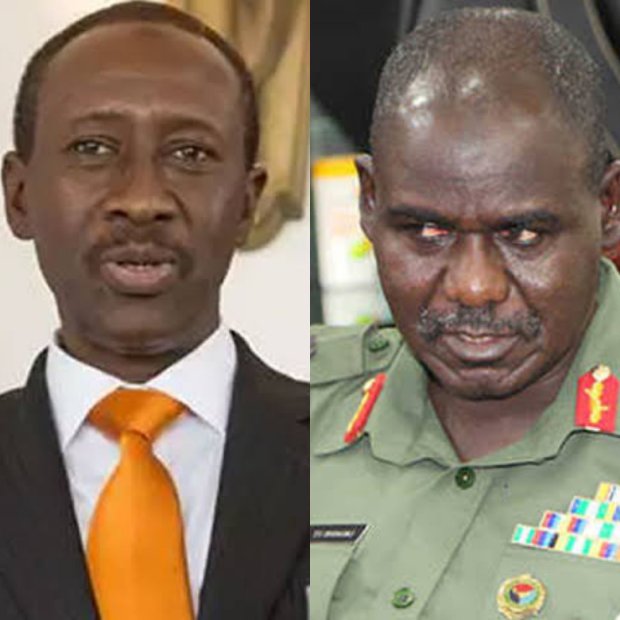 An Abuja based Nigerian lawyer, Barr. Osuagwu Ugochukwu, has urged Nigerians to disregard the allegations being peddled in the media, that monies meant for purchase of arms, were allegedly missing under the watch of the former Service Chiefs.

The National Security Adviser (NSA), Major General Babagana Munguno Rtd, had in an interview granted the British Broadcasting Cooperation BBC, alluded to the filtering of funds meant for arms by former service chiefs.

In his reaction, made available in a Press Release he personally signed, Osuagwu Ugochukwu Esq, insisted that the names of LT General TY Buratai, and other former service chiefs, were not mentioned in the interview, affirming that funds meant for arms were never misappropriated under Buratai’s stewardship as Chief of Army Staff.

He further pointed out, that NSA Babagana Munguno, has denied making such accusations, and urged Nigerians to disregard any such misquote, that may dent the integrity of the former COAS.

Investigation has shown that ex-service chiefs aren’t arms procurement chiefs of the Nigerian Defence Ministry and as such has no business in matters relating to funds for purchase of Arms.
The Ministry of Defence is saddled with the responsibility of making available Arms for the Military.

Ugochukwu urged Nigerians to channel their inquiry to the Ministry of Defence, if they require more information about arms procurement under the former service chiefs, particularly LT General TY Buratai, promising to resist any attempt to tarnish the image of the former COAS through legal channels.