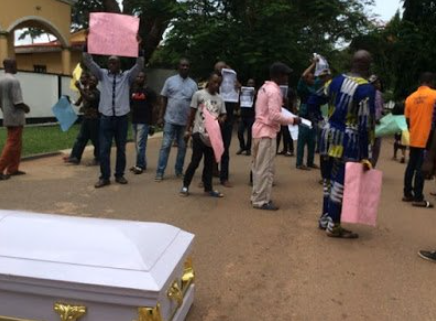 Residents of Ovia Northeast Local Government Area of Edo State stormed Government House, Benin, with the body of one of the seven persons killed in their area by criminal herdsmen.

The protesters arrived at the government house on Thursday evening, Feb 18, where they gave Governor Godwin Obaseki a three-day ultimatum to ensure adequate security of lives and property.

They said they resorted to taking the body to the State’s Government House because when they reported to the police in their area, they were simply told to deposit the body in the morgue.

The protesters said they had experienced frequent killing of innocent residents by herdsmen in the last few weeks.

Seven persons were killed by criminal herdsmen in the farming communities of Ugboke, Oshodi, Okokodo, Ariyan and Yoruba camp in the LGA.

The leader of the protesters, Michael Idahosa, said residents of the affected communities could no longer bear the incessant attacks by the criminal herdsmen.

He said: “We are here to protest the killings by herdsmen in our communities. Governor Godwin Obaseki came to Ovia Northeast LGA in 2017 when herdsmen killed one of our persons and he promised to tackle the problem of herdsmen in our area, but Edo State government did not address the issue.”

Deputy Governor, Philip Shaibu, who received the protesters, reassured them that the state government would intensify efforts at providing adequate security to check the criminal activities of killer herdsmen in the state.

Shaibu said: “As a state, we have made up our mind not to lament, but to look for solutions on how to protect our country and our state.

“There was also an attack in the early hours of today in Niger State. It is a national problem. As we speak now, Governor Obaseki and other governors are in Abuja to discuss this insecurity issue in our country.

“You will remember that we are bringing in local vigilance members to collaborate with law enforcement agencies. We are strengthening our system and we will still need your support.

“We do not want to take laws into our own hands, but at the same time, we cannot fold our arms and watch the people kill us. Take it easy; some bodies are yet to be found, I have had a discussion with the security agencies. Their personnel will move into the area.

“I can assure you that they will recover bodies of all the victims and we will intensify the security in the area.

“We will categorise the area as one of the flashpoints in Edo State. So that you can sleep with your eyes closed.”