World Cancer Day: There Are Only 3 Public Radiotherapy Centres In Nigeria (Read Details) 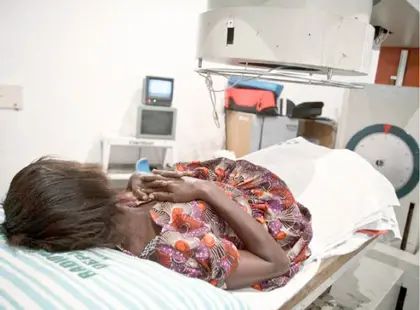 Nigerians suffering from cancer have lamented the high cost of treatment and dearth of treatment facilities and specialists.
The patients and medical experts, who spoke ahead of this year’s World Cancer Day called on governments at the federal and state levels to subsidise treatment and save lives.

February 4 is marked as World Cancer Day and this year’s event is themed “I am and I will”.

Medical practitioners who spoke to Daily Trust revealed that there are no more than three functional radiotherapy centres for cancer treatment in Nigeria.

The Chief Medical Director of the National Hospital, Abuja, Dr Jafaru Momoh, said aside from the hospital he heads, which has two linac radiotherapy machines, only the Lagos University Teaching Hospital (LUTH), which is a Public-Private Partnership (PPP) has two of the machines.

Speaking about these challenges, an Oncology Consultant at Aminu Kano Teaching Hospital (AKTH), Dr Muhammad Inuwa Mustapha, identified lack of radiotherapy machine as a monumental concern that requires urgent attention from both the federal and state government.

“Based on the International Atomic Energy Management Agency recommendation, any community that has 250, 000 people is supposed to have a machine. So, if you look at Kano, based on our population we are supposed to have not less than 20 radiotherapy machines and we have none. With over 200 million people, we have only three functional machines for the whole country and this is terrible,” he said.

He, therefore, appealed to the government to put up a radiotherapy machine in each state so as to address the major concern of cancer patients.

Other public hospitals do not have radiotherapy machines or the ones they have are obsolete, Daily Trust reports.

Cancer kills 72,000 yearly
According to the Nigeria National Cancer Prevention and Control Plan (2018-2022), cancer is responsible for 72,000 deaths in the country every year with an estimated 102,000 new cases annually.

The World Health Organisation (WHO) describes cancer as a large group of diseases that can start in almost any organ or tissue of the body when abnormal cells grow uncontrollably, go beyond their usual boundaries to invade adjoining parts of the body and/or spread to other organs.

The Commissioner for Health in Benue State, Dr Joseph Ngbea, who is the current chairman of the National Cancer Committee of the Nigeria Medical Association (NMA), said the cause of most cancers is not known but added that there are risk factors.

These include age, genetics and family history, geographical factors (some cancers are related to excessive exposure to sunlight) and environmental factors like what people eat, viruses and infections among others.

Experts say cancer can be treated by surgery, radiotherapy, chemotherapy, hormonal manipulation and targeted therapy; but the facilities available for the treatment are in short supply.

Dr Umar, who is also a public health physician, said other cancers that affect Nigerians, are colorectal cancer, which affects the intestinal tract, lymphomas, bladder, lung, and skin cancers, among others.

He said the state of cancer care remains poor in Nigeria because of lack of political will on the part of leaders, poor funding and expensive treatment, which is beyond the reach of the poor.

He said the federal government’s pledge under the former Minister of Health, Prof. Isaac Adewole, to establish a cancer treatment centre in each geopolitical zone, has not been fulfilled till date.

Prof. Adewole said most hospitals in the country do not have the requisite diagnostic and treatment tools and enough qualified personnel to properly treat cancer efficiently at the early stages.

Patients, relatives lament
Mrs Martina Boniface, who suffers from breast and brain cancer, said financial challenges and the dearth of cancer equipment at hospitals in the country are some of the major challenges people living with the disease face.

She said:-
“It is not easy to run chemotherapy. At first, I ran seven courses of chemotherapy and after then, I went through radiotherapy.

“I went to Sokoto and spent three weeks. The machine got spoiled because we were many. At the end of the day, I came back to AKTH (Aminu Kano Teaching Hospital) again and from there I was referred to Abuja.

“I went to the National Hospital and spent almost three months there. You have to go through the clinics, see all doctors for an investigation to be made to know how many courses they are going to do for you. At the end of the day, I ended up taking six courses of radiotherapy but it was expensive. Anybody that ever tries that place knows how expensive it is.

She said doctors and nurses are available for chemotherapy treatment at Aminu Kano Teaching Hospital (AKTH) but “the problem is money for buying drugs by the patients.”

Mr Yusuf Isah, whose wife suffers from cancer and accesses care at the University of Abuja Teaching Hospital (UATH), said the hospital offers the best treatment but at a high cost.

“I pay everything out of pocket. I am a private school teacher and the COVID-19 affected my work and salary for about nine months .There is no insurance for health for me and my family,” he said.

A relative of another patient who identified himself as Famous, urged the government to make cancer treatment a priority by reducing the cost of treatment to reduce the huge financial burden.

He said most people are not under the National Health Insurance Scheme (NHIS) because they work with private organisations or self-employed, adding that he is still a student and supposed to be in school but could not go because he has to stay with his mother.

A patient, Fatunbi Ogundele, also lamented the high cost of drugs and therapy, urging the government to support cancer patients.

“I have been suffering from cancer in the last five years. It has not been easy. My children, wife and I have spent a lot.”

Ibrahim Hamza, who lost his mother five years ago to ovarian cancer, said she was referred to the Ahmadu Bello University Teaching (ABU) hospital for treatment but later referred to the National hospital in Abuja for radiotherapy.

Hamza said his mother eventually died because they had no contact in Abuja and could not afford the needed funds for her radiotherapy.

Also, Aisha Abdallah, who was recently diagnosed with breast cancer in Bauchi State told one of our correspondents that she has been referred to either the National Hospital or the Usmanu Dan Fodio University Teaching Hospital, Sokoto for radiotherapy. She said she was given a bill of N1.5 million for five sessions of radiotherapy and would have wanted to come to ABU Teaching Hospital but was told the radiotherapy machine had broken down.

Daily Trust gathered that though there is a huge traffic of oncology patients during a visit to the ABU Teaching Hospital, patients said most of the machines were not serviceable.

The hospital’s Public Relations Officer, Wakilah Iliyasu, corroborated that even though the hospital has enough oncology doctors, it has challenges with some of its machines.

A Consultant Oncologist at the hospital, Dr Adamu Abdullahi, said there has been a drop in the number of oncology patients that visit the facility since its radiotherapy machine for external beam broke down almost two years ago.

“In the past, we used to see 40 to 50 for the new cases per week and during the follow-up clinics, we could see up to 80 to 100 patients every week. But since the equipment broke down, the number has drastically reduced.

Dr. Abdullahi explained that the hospital was trying to procure a new machine but the process was delayed by the COVID-19 pandemic and funding. He said a bunker for the machine has been built and hopefully, the machine will be available before the end of the year.

Dr Usman Yelwa of Jama’atul Nasril Islam Specialist Hospital in Kaduna, said therapy, injection and other drugs are equally expensive, which is why most people hardly go to the hospital to seek treatment except the wealthy individuals.

Our correspondent gathered that cancer patients in the state who are in need of radiotherapy have to go to Abuja or Lagos to undergo the procedure due to lack of radiotherapy machine in the state, a situation that is putting patients at higher risk and excruciating hardship.

UPTH
At the University of Port Harcourt Teaching Hospital (UPTH), our reporter observed that the hospital has only one mammogram machine for diagnosis of cancer.

A source at the hospital who pleaded anonymity said that the machine is not enough to take care of the number of patients that trooping for diagnosis.

LUTH
The Lagos University Teaching Hospital (LUTH) in the past had difficulty treating cancer patients but the situation has changed. In 2019, the fate of cancer patients in Lagos and its environs changed when the NSIA-LUTH Cancer Treatment Centre was commissioned.

He said patients who ought to have travelled out of the country come to the centre. “We see about 120 patients every day,” he said.

He encouraged the government and other stakeholders to go into a public-private partnership in order to have enough machines across the country.

He also encouraged the NHIS to include cancer care as part of the health insurance options for Nigerians. This, the cancer expert said, is the solution to the cost of cancer care in Nigeria.