Bobrisky revealed that he is going to have more surgery while hinting to his fans that he had recently gone under the knife.

Sharing a throwback photo of himself before he became famous, the influencer described himself as the “widest transformation ever in the gram”.

He also advised people to never give up on their dream because “giving up is never an option”, while stating that he spends “real” money and not “audio”. 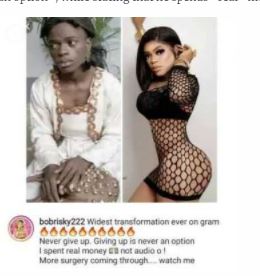