The FULL STORY Of How Stingy Men Association Of Nigeria Started

It’s no longer new to everyone on social media that a new movement has gone viral on the Internet: #stingymenassociationofnigeria.

Countless men who are celebrities have joined this movement, and it’s making waves on the Internet.

Many people don’t know the reasons or cause of this movement while some might be aware already.

A Twitter user, @StingyMenPro posted on his page the story and reasons behind the #stingymenassociationofnigeria movement which started going viral a few days ago.

The movement went viral in just few days and many people don’t know the reasons or cause of this gallant movement.

I would be very brief as all points count.

Nigerian ladies are found of doing nothing than cashing out from men. They are seriously jobless. Nowadays, in Nigeria �� most ladies are into #olosho just because of their high expenses.

They want to drive exotic cars, apply expensive creams, wear most timely and expensive clothes, fix expensive wigs and live in world most expensive houses without having a good paying job.
Where do you think all these expensive stuffs are coming from?
They are coming from the so called God Fearing Men.

Men would work tirednessly and one olosho would come and claim his wealth.

Honestly speaking, it is very annoying.

Men are now trying to avoid these crazy shits this new year 2021 as the previous year taught us great lessons of life.

Imagine a lady who would have collected huge sum of money from a guy just to come and visit him but would later resist and still go visit another man.

He also advises ladies to stop selling their bodies for money and that they should be very hardworking this year. 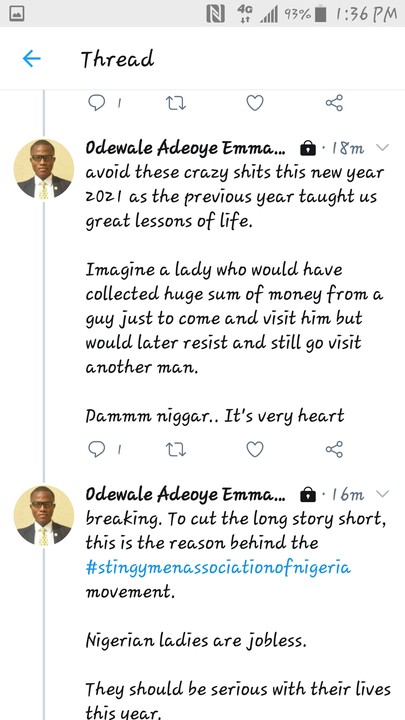