Femi Fani-Kayode has blasted members of the Muslim Rights Concern MURIC over their call for President Buhari to place a travel ban on US President Donald Trump.

Reacting to the call via his Twitter handle, FFK who is a fierce supporter of Trump, said members of the group ought to be tied and put in a monkey cage.

”Those that say we should put a travel ban on Donald Trump & stop him from coming to Nigeria ought to be tied in fetters, put in a monkey cage,

shipped to Saudi Arabia & dumped in the slums of Riyahd from where they must never be allowed to return. Grow up & stop talking rubbish!” 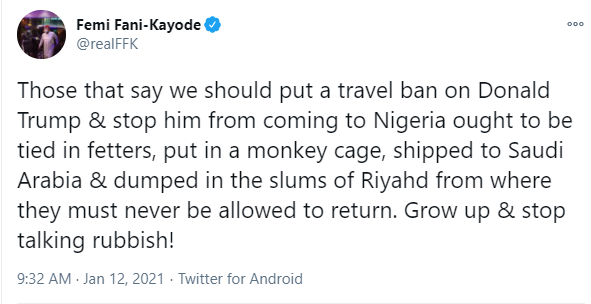