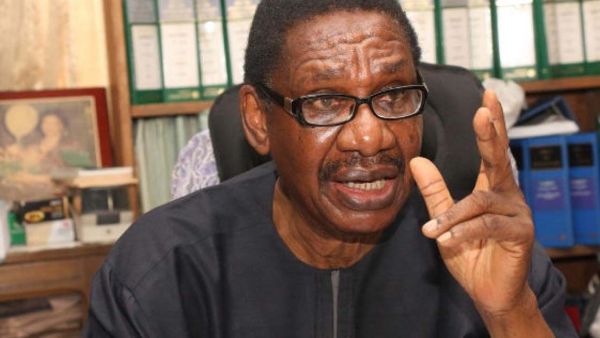 Speaking exclusively with Daily Independent in Lagos, Sagay, who said the Federal Government was overwhelmed by various security challenges bedevil­ing the nation, such as Boko Haram insurgency, banditry, kidnapping, herdsmen at­tacks and others, added that Nigerians should be allowed to defend themselves when attacked.

According to him, unprovoked attacks especially on villages by bandits will drastically reduce in the country if the communities are allowed to arm themselves with weap­ons to defend themselves.

Comparing present day Nigeria to his youthful days, Sagay said the level of inse­curity today is unprecedent­ed, adding that the nation witnesses unprecedented amount of bloodshed, destruction of properties and displacement of people from their native homes and places of business.

“The country has become so dangerous. All sorts of things are happening nowa­days. You have kidnappers, bandits, Fulani herdsmen, Boko Haram. The reality is that there is nowhere that is safe in the country. Traveling by road today is a very risky endeavour that one will hard­ly try. So, there is total insecu­rity in the country.

“I don’t know what has gone wrong, why our people have become so violent and savage. Individuals no lon­ger feel safe outside his own house. I am not even sure that one is absolutely safe in his own house.

“What I will like to suggest to the government is that they should allow ordinary Nigeri­ans to carry arms. Everybody who wants to carry arms as a form of self-defence should be allowed to do so. This is necessary so that when these bandits and miscreants attack them, they will know that the person they attacked has the capacity to defend himself.

“All these restrictions on owning weapons should be lifted. Let the generality of the public be allowed to own weapons, especially in all those villages where they are being massacred. Their men should be given weapons so that when the attackers come, they will also be given a chal­lenge which may discourage them in future”.

“We have had causes where bandits attacked villages but the people are powerless to de­fend themselves. By the time the security agents come in, the attackers had left. They will look for a quiet time and launch another attack. That will stop if the people have the capacity to defend them­selves.”

While absolving President Muhammadu Buhari of blame, Sagay said any other government would have been overwhelmed as nobody could have envisaged the torrents of attacks happening in all parts of the country.

“Let me say this, there is a tendency to blame the president, but it is not the president’s fault. I am not a sociologist but the way I see it, it is society developing in the wrong direction. It has nothing to do with the gov­ernment.

“Of course, it could have something to do with the level of poverty, unemployment and so on. But you can see that it is everywhere, both in urban and rural areas. Are Zamfara, Taraba, Yobe not rural areas? We can say that the urban youths are unemployed, what is the excuse of the youths in the rural areas? So, it is as if there is some sort of virus that has simply developed”.

“Truly, the government is overwhelmed because no government will envisage an attack like these from every direction. It’s as if all the mis­creants from different genres and denominations have held a conference where they agreed that they should tor­ture and torment the country at the same time.

“So, it’s difficult and it is not the fault of the government. It is the time that we are in. Any other government would have been in a dilemma over this matter. It’s so overwhelming! We don’t have enough security forces to cope with all these”, he said.