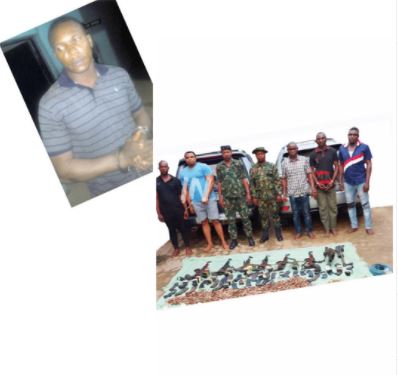 Robbery suspects arrested in connection with the attack on a bullion van and killing of four policemen in Ebonyi State in July have explained how their gang leader, one Clement Abanara aka Millions, planned their operations from Ikoyi prison, Lagos, where he is remanded.

They were apprehended recently by operatives of the Inspector-General of Police Intelligence Response Team while they were reportedly planning to rob a commercial bank in Asaba, Delta State.

According to reports, Abanara was arrested four years ago and arraigned on robbery charges before a Lagos court which remanded him in prison custody.

He allegedly took part in bank robberies in Lekki, Ikorodu, Festac and Agbara areas of Lagos, where millions of naira were carted away.

In an interview with journalists, the dismissed soldiers said they were looking for money to support their families when a friend, who is serving a jail term in Ikoyi prison, introduced them to Abanara.

One of them, Ayeni, said,

“I joined the Nigeria Army in 2003 and I was dismissed because I took part in an illegal duty.

After my dismissal in 2014, I had no job then I was introduced to Millions (Abanara) who is in prison.

He linked me up with his cousin Robinson. Millions said he wanted me to provide military cover during operations and I brought in my colleague, Ariston.

We went for the operation in our uniforms. We were unlucky the bullion van escaped from the scene.

I also took part in a robbery operation in Awka, Anambra, the next day and I got N150,000 as my share.

I was arrested while we were making plans to rob another bullion van in Asaba.”