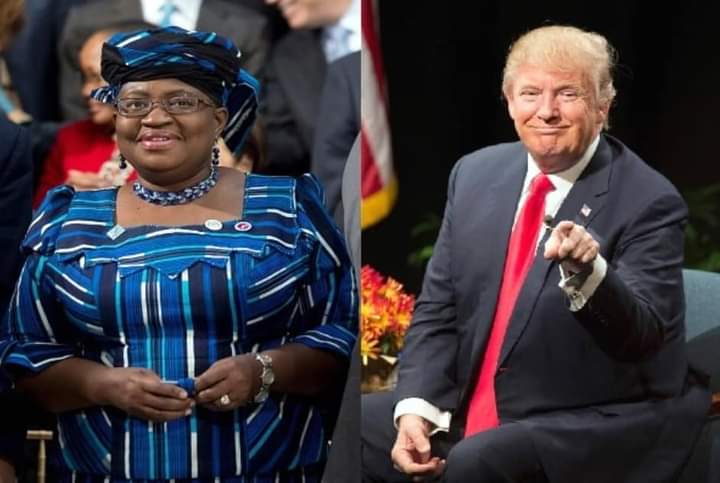 Do you know that despite securing the vote of 163 of the 164 members of the trade organisation on Wednesday, Okonjo-Iweala could not be declared the head of the WTO because of the objection by the United States?

The US controls the biggest economy in the world of over 21 Trillion Dollars followed by China of about 14 Trillion Dollars. So both have strong interest in whoever becomes the DG of the world trade organization between Ngozi Okonjo-Iweala (Nigeria) and Yoo Myung-hee (Republic of Korea). It is more of the battle of heavy weights.

The US Trade Representative (USTR), Robert Lighthizer, had in June told US lawmakers and some trade members that, “the WTO needed a reform-driven leader that is very experienced in international trade deals. A 25 years trade deal experienced, Korean nominee obviously became the US choice coupled with other sensitive reasons including the ongoing China trade dispute saga with the US.

This was said far ahead when nations even began to submit nominees at all. So it is an act of mischief or mere ignorance to say being Black or Africa is responsible for Okonjo-Iweala’s rejection.

Okonjo is sound and intelligent with many years of international finance, development economics and bilateral negotiation skills across continents.
In fact she applied for the US citizenship in 2019 to boost her chance. But it goes beyond that.

It is more of trade war between the United States and China and the Said unfair deals agreement between nations across the world in which the US claimed to be the greatest recipient. Unfortunately, the US election is also by the corner. Even the formal VP, Joe Biden will be very careful to make a statement now. It can be that political.

China won’t pick the US choice and the US won’t pick China choice which can easily be Okonjo-Iweala due to China’s interest in Africa. China won’t pick South Korean candidate due to the strong economic and military relationship between the US and South Korea. It is very sensitive. Now you see why both of them were silent on their choices until now.

European Union will naturally pick an Africa candidate. One for solidarity with African continent and secondly for her growing interest in Africa.

This is most likely to happen by November 9. Either China or US will pull out of the WTO depending on the final choice between Okonjo and Yoo. But I see Okonjo-Iweala carrying the day.

The position of the DG in any world trade dispute is all about authority and influence. If the members don’t want to listen to the director-general they won’t. They will just go their own way in the WTO, or go elsewhere. The DG cannot control that.

So it goes beyond racism, colour, gender but more of interest and trust. It is OK to be biased. We all do. But do not close your eyes to facts.