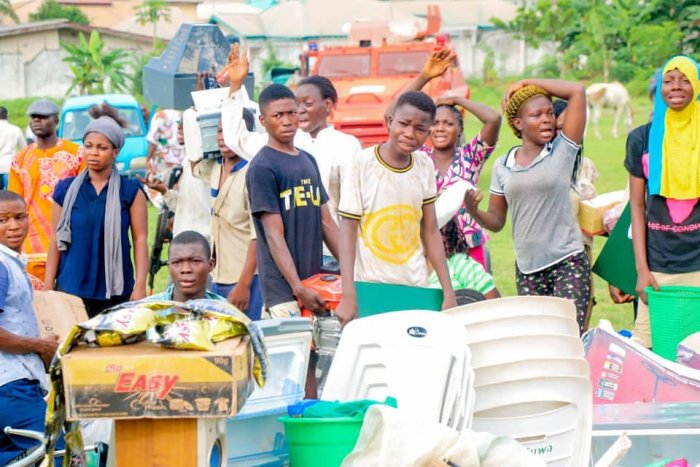 Some residents of Boluwaduro community, Ijetu Olowookere Area, Osogbo, Osun State have returned items they looted during the #EndSARS crisis.

Some of them dropped the looted items at Gidado Ijetu Government Elementary School, Ijetu Area, off Ilesa/Osogbo Road, Osogbo.

The Chairman of the Community, Mr Titus Tunde Sangodipe, said that some people dropped looted items at the back of a house in the community.

He said they did so in line with the amnesty declared by the state government that those who looted government warehouses, private business premises and houses of politicians should return the loots voluntarily to avoid arrest and prosecution.

Policemen have since visited the community to take the items away.

A senior lawyer, who lives in the area, also confirmed to Daily Trust that the residents were returning looted items and appealed to the governor, Adegboyega Oyetola, to lift the curfew imposed on the state.

The lawyer said he saw the Amotekun Corps, led by it’s Field Commander, Chief Amitolu Shittu, retrieving the looted items where the looters dumped them.

A resident of the area said the items returned included deep freezers, a big generator, a fire extinguisher and a bag containing baby wears.

The Chairman appealed to others who kept looted items in their houses to bring them out.

Thereafter, some people dumped items they looted on the street in the community.

However, soldiers later stormed the community, recovered more loots and arrested some people.

It was later discovered that some people were throwing looted property inside Osun River because they were afraid of the Soldiers.

The Chairman appealed to the Soldiers to release those arrested so that other would bring out the loots or drop the items where they could be recovered rather than throwing the items into the river.

The Police Public Relations Officer for Osun State Police Command, Yemisi Opalola, confirmed the recovery of the looted items and advised other people who looted to return the loots immediately.