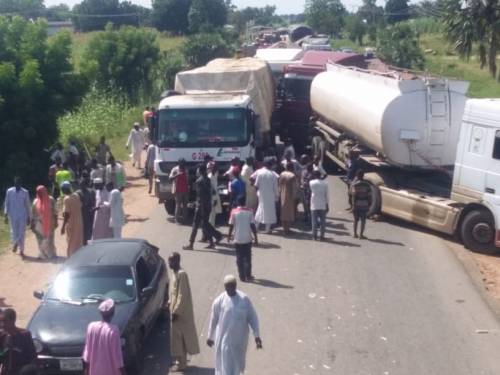 The attack by police on the tanker driver allegedly occurred near Mayo Belwa town in Adamawa State.

This comes amidst nationwide protests by Nigerian youth against police brutality and bad governance.

An eyewitness, Muhammad Ali, said the incident occurred when police officers from Karewa Area Command in Yola accosted the tanker driver, who was transferring fuel from his reserve tank to the main tank and demanded bribe.

“A tanker driver whose fuel got exhausted was trying to transfer fuel to the main tank from his reservoir.

“Some policemen from Karewa Area Command who are notorious for extorting motorists accosted the tanker driver and demanded bribe from him.

“When he failed to heed to their demand, they descended on him, beat him up to stupor and even tore his clothes. Onlookers had to intervene to rescue the man and rushed him to hospital,” he disclosed.

Another eyewitness, Sale Baba, said, “We are tired of the atrocities perpetrated by the police that is why this time we shutdown the highway to demand justice for our colleague who was brutalised for committing no crime.

“The situation is now causing serious tension as commuters plying the highway have become stranded for hours.

“The authorities should take stiff actions to ensure that the policemen are brought to justice as they constitute a threat to peace and security.”

Reacting, police spokesperson in the state, DSP Sulaiman Nguroje, said, “The situation is under control.

“The Commissioner of Police, Olugbenga Adeyanju, has directed that the matter be investigated immediately.”