Controversial social media commentator and self acclaimed celebrity bar man, Cubana Chief Priest has allegedly had his endorsement deal with Vbank terminated over alleged assault on a woman.

The Lagos socialite was recently accused of beating a woman at a club in Rivers state, which prompted the management of the bank to terminate his appointment, according to a letter allegedly sent to him.

If you recall, Cubana Chief Priest recently dragged and insulted Linda Ikeji’s parents and her kid sister, Sandra Ikeji months ago on social media, sending his fans to hurl insults on her by promising them 50 thousand Naira for the most painful insults.

See his termination letter from Vbank below: 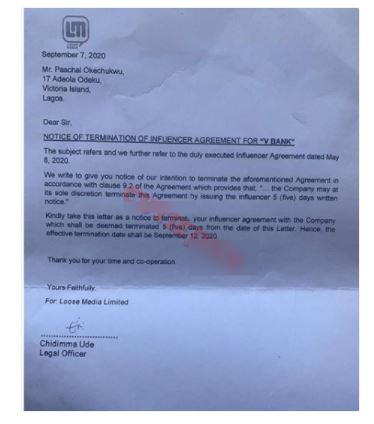 He is also alleged to have been kicked out as a top management staff of the Cubana Group.