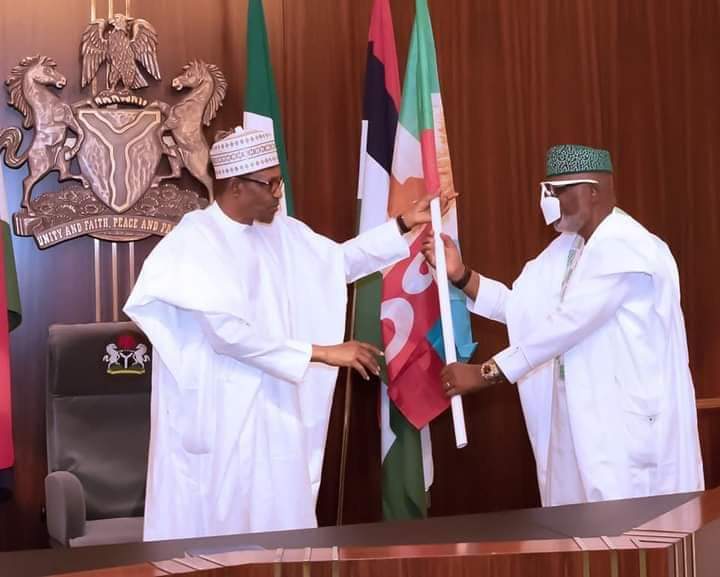 The Senior Special Assistant to the President on Media and Publicity, Garba Shehu, said the President, Major General Muhammadu Buhari (retd.), has predicted “easier clear victory” for the governor of Ondo State, Rotimi Akeredolu, in the forthcoming governorship election in the state.

Akeredolu is seeking re-election on the platform of the ruling All Progressives Congress in the election scheduled to hold on October 10, 2020.

He has his deputy, Agboola Ajayi of the Zenith Labour Party; and Eyitayo Jegede of the Peoples Democratic Party as his main challengers in the election.

But Shehu, in a statement on Friday titled, ‘APC governorship candidate will win in Ondo State fairly, says President Buhari’, quoted the President as saying that Akeredolu’s victory in the forthcoming election will be easier than that of his first term.

The presidential aide said Buhari spoke while presenting the party’s flag to Akeredolu at the Presidential Villa, Abuja.

“The President, who presented the party’s flag to the candidate at the Presidential Villa, said the reconciliation process in the state branch of the party had provided a solid ground for an easier clear victory for the candidate than he achieved in his first term.

“While assuring Akeredolu of the party’s full support, the President said a peaceful and fair election that reflects the will of the people should be upper most, urging adherence to the regulations of the Independent National Electoral Commission and protocols of the Nigeria Centre for Disease Control.

“President Buhari noted that the party’s mechanism for resolving differences was most effective, and would be sustained to strengthen relationships and project the objectives of the party as people-focused and development-oriented.

“The APC candidate was presented to the President by the party’s Caretaker Committee Chairman, Mai Mala Buni, who is also the Governor of Yobe State.”

Buni also told State House correspondents at the end of their meeting with Buhari that Akeredolu will win the election because he has proven to be an excellent administrator in his first term.