Akor, a 42 years old father of six children from Enabo village in Ankpa Local Government Area of Kogi State was arrested by the Kogi State Command of the NDLEA alongside his accomplice David Ameh.

Akor who claimed he had invested so much in the business and cannot afford to lose it to the arms of the law said he learnt the trade in Owo, Ondo State.

The prime suspect who cried profusely to stop men of the NDLEA led by its commander Alfred Adewumi from destroying his farm located in Oketepe in Okula community in Ofu Local Government of Kogi State said he would rather die than watch the officers destroy what he had worked hard for in the last one year. 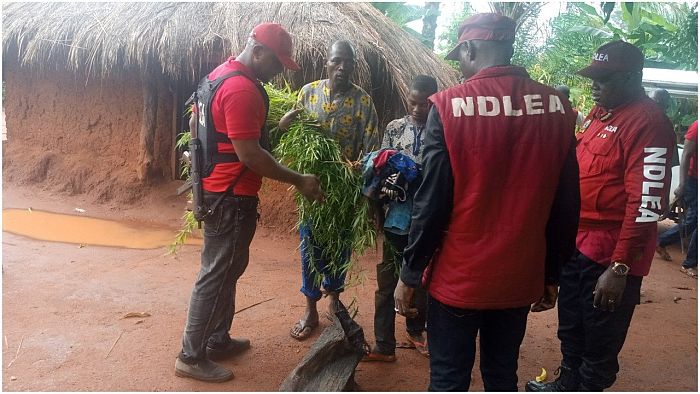 He noted that he is aware of the law banning the sale of cannabis sativa insisting that it is business which must be followed with risk.

”I am the owner of this farm. I learnt it in Yoruba land. When I cultivated one last year, it was stolen. So it is this year that I bought seed from Yoruba land to plant new ones before I was caught.

“Indian hemp business is luck. In this farm, I can get many bags here. I do sell one bag for N20,000 depending on the area I am selling it. It could be more. I spent N12,000 for labour in cultivating this farm. It better you people kill me than destroy this farmland.

“This is my business. I spent a lot to allow this plant to grow up to this level. In the next two weeks, I am supposed to harvest it. Now you people have come here to destroy it. Just kill me, so that I won’t see you people destroying what I have laboured for. I am looking for money because I am illiterate. I don’t want to engage in armed robbery or kidnapping that is why I am into this business of Indian hemp”.

His action forced the NDLEA commander Alfred Adewumi to calm him down insisting that the war against illicit use of drugs is on course in Kogi State.

Addressing journalists on Wednesday, shortly after the destruction of the large cannabis farm, the Kogi State Commander, National Drug Law Enforcement Agency, NDLEA, Mr Alfred Adewumi lamented the increasing wave of illicit use and cultivation of cannabis sativa in the state.

Adewumi stated that the two suspects were caught through intelligence gathering by officers of his command.

The commander noted that the latest breakthrough in the fight against illicit use of drugs in Kogi State is coming three days after the command arrested the duo of Endurance Samson and Abah Sunday for alleged possession of 36.2 kilogrammes wrap of cannabis sativa.

“Seeing, they say is believing. What you are seeing today is certainly more than three football fields put together. I would let you make your judgment. Just look around, that is the huge expanse. We just left the first farm which is equally a huge cannabis plantation.

“This is very unfortunate. I am worried about this unfortunate development. I have thought that Kogi State will not descend to this point. As things stand today, it will be direct self-denial to begin to say that Kogi state is not planting cannabis sativa because the evidence itself suggests the fact that there is high planting of cannabis sativa in Kogi State. Sadly Kogi State can also now begin to rank among those states where you find cannabis sativa plantations.

“We will not relent in fighting against illicit use of drugs that is why we took the fight to their doorstep. Kogi State is the gateway to other states in the north, south, east and western parts of this country.

Adewumi said all the suspects would be charged to court as soon as investigations were concluded.