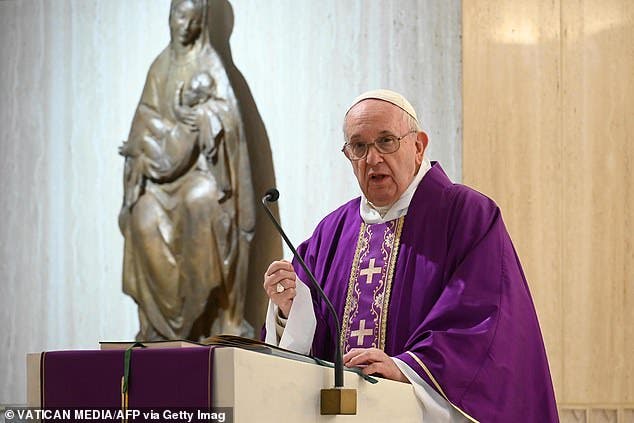 Catholic Pontiff, Pope Francis weekend prayed for the victims of insecurity and for peace in troubled parts of Nigeria.

This is even as the Archbishop of Abuja, Most Rev. Ignatius Kaigama, called on the Federal Government to change its approach to the security challenges affecting the nation.The leader of INRI Evangelical Spiritual Church, Primate Elijah Ayodele, has urged the Sultan of Sokoto, Muhammad Sa’ad Abubakar and President Muhammadu Buhari to intervene in the death sentence passed on Kano singer, Yahaya Sharif for committing blasphemy.
Primate Ayodele urged both Buhari and the Sultan to intervene in the matter and ensure the young Nigerian is not killed.

In a statement he forwarded to NAIJALOADED, on Monday, the clergyman explained that he isn’t disputing the fact that Sharif was guilty of blasphemy but that death should not be a punishment for such.

He noted that the

“Sultan of Sokoto is a man of love and should use his powerful office to ensure that Sharif isn’t killed.

“Killing him is tantamount to incurring the wrath of God, hence, justice should be tampered with mercy.”

He further noted that if death punishment is being passed on such offence, then any Boko haram member caught should be immediately killed too

“God isn’t happy about killing Sheriff, I’m not a Muslim but I appeal to Sultan who preaches love, and the Islamic council, to use their good office to address the issue of Yahaya Sharif.

“I know they have been killing several people but Yahaya Sheriff’s case is different, his death will incur God’s wrath, which won’t be good.

“President Buhari should do something about Sharia Laws especially the ones that deal with execution, if execution is the punishment for an offence like this, then execution should also be the punishment to Boko haram members.

“I am not disputing the fact that He committed an offence but justice should be tampered with mercy,’’

The Pope spoke in his Angelus address broadcast via his official Twitter handle @Pontifex.

“Let us also seek intercession for all the situations in the world that are most in need of hope: hope for peace, for justice, hope for a dignified life.

“Today I would like to pray in particular for the population of the northern region of Nigeria, victims of violence and terrorist attacks.”

Pope Francis said that he is also paying particular attention to the negotiations between Egypt, Ethiopia and Sudan regarding the Nile River.

He invited the three African countries to continue the path of dialogue.

“Let dialogue, dear brothers and sisters of Egypt, Ethiopia and Sudan, let dialogue be your only choice, for the good of your dear populations and of the entire world,” the pope said.

Similarly, Kaigama who spoke in a Homily delivered at the priestly ordination of seven deacons at Our Lady Queen of Nigeria Pro-Cathedral on Sunday in Abuja, said peace parleys and sincere negotiations will create better opportunities for solutions to the present security challenges to thrive than military operations.

“As we pray in this Mass, let us remember the families and individuals who have lost their loved ones in the recent guerrilla attacks in Southern Kaduna and other parts of the nation.

“We have had enough of these killings. Dialogue can resolve problems better than guns, bombs and arrows. We call on the Government at all levels to provide immediate and lasting security solutions.”

Kaigama also enjoined the newly ordained priests to be instruments of peace, forgiveness and shepherd the flock of God that is entrusted to them.

So, he cautioned them against looking for a reward but with a generous heart and to always be an example to the flock.

“May we, the priests and religious people, receive the Grace to be genuine witnesses of Jesus.

“So that we will be a shining light in our world that is so much in need of God’s mercy. May God who has begun this good work in us, bring it to fulfilment.”