‘May My Album Blow In Jesus Name’ – DJ Cuppy

Taking to Twitter on Sunday morning, the daughter of business mogul shared photos of herself with the caption:

“May my Album BLOW in Jesus Name #OriginalCopy”

The artist has also celebrated herself for her single ‘Jollof On The Jet’ featuring Rema and Rayvanny. She wrote on Twitter:

“OVER 14 millions plays of #JollofOnTheJet THANK YOU MY CUPCAKES!!”

Asides this, her craft as a musician has been praised for its improvement. A Twitter user identified as Elon Mosque took to Twitter to express how she feels about DJ Cuppy’s growth as a musician. She wrote:

“DJ Cuppy’s music is so good now. I remember when people used to mock her music. Just proves you can be good at something as long as you don’t give up on it. People have opinions, grind regardless.”

‘Original Copy’ will be released on August 21. 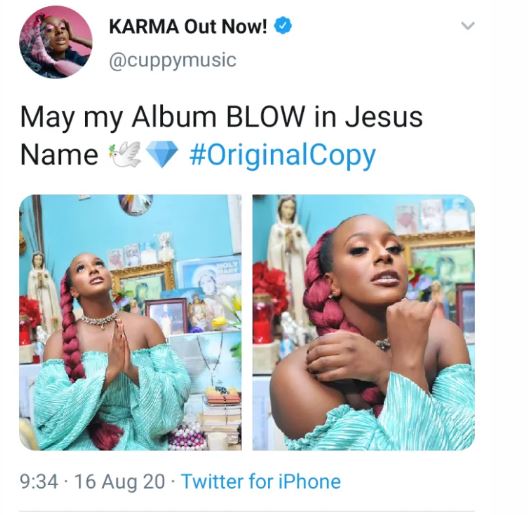