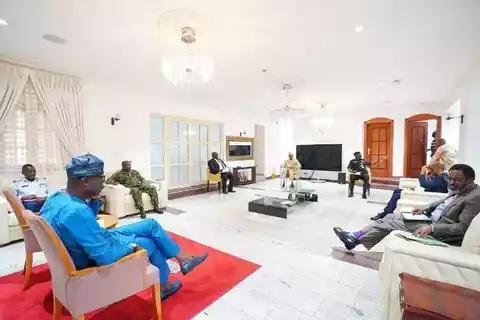 In the midst of the panic and fear surrounding the spread of the dreaded coronavirus or COVID-19 as it is also known, bystanders were treated to a dose of comic relief at the Lagos State Government State House, Marina when the National Leader of the All Progressives Congress (APC), Asiwaju Bola Ahmed Tinubu arrived for an emergency closed door meeting with Governor Babajide Sanwo-Olu.

There was an initial awkward moment when the incumbent approached the former Governor for pleasantries, apparently going in for a courteous handshake, it appeared that both men suddenly remembered the existence of the coronavirus and quickly switched to the ‘elbow greeting’ while journalists, government officials, and party members burst into laughter.

Meanwhile, the National Leader of the All Progressive Congress, Asiwaju Bola Ahmed Tinubu has advised all residents of Lagos and Nigerians in general to obey government directives and measures put in place to curtail the spread of Coronavirus.

Addressing newsmen at the Lagos House Marina after meeting with Governor Babajide Sanwo-Olu behind closed doors with some other top members of the APC, Tinubu who said he was in support of any decision taken by the government, including a total lockdown if necessary, to halt the spread of the virus, encouraged Nigerians to do the same.

So far, Lagos has the highest number of confirmed Coronavirus cases in the country. The State Government has since implemented some measures, including social distancing and directing a category of its workers to work from home.

Governor Babajide Sanwo-Olu later met with some members of his cabinet and other key stakeholders on the next step to take to halt the spread of Covid-19.

While briefing newsmen later, Governor Babajide Sanwo-Olu, the Deputy Governor; Dr. Obafemi Hamzat, and members of the state executive council were noticed making conscious efforts to maintain the social distance being propagated by government as a way of stopping the spread of the coronavirus.