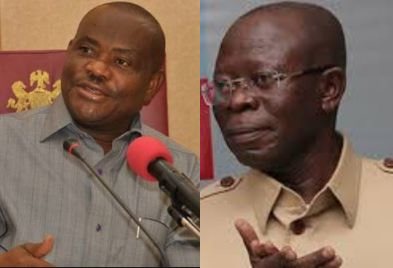 The Rivers State Governor, Nyesom Wike, has condemned the statement by Adams Oshiomhole, National Chairman of the All Progressives Congress, APC, following the Supreme Court ruling on Bayelsa governorship election.

Wike said Oshiomhole has no power to stop Diri Douye’s swearing-in as governor of Bayelsa State.

The apex court also declared Douye Diri of the Peoples Democratic Party, PDP, winner of the last governorship election in the state.

Displeased by the ruling, Oshiomhole had vowed that nobody will be sworn-in as Bayelsa State governor because Lyon of the APC had the highest number of votes.

In a statement released by his Special Assistant on electronic media, Simeon Nwakaudu.

He said: “Who is Oshiomhole to determine who has spread in a state? Supreme Court has made a ruling. It is unfortunate for Oshiomhole to come forward to say that nobody will be sworn in.

“He believes that he has the forces to cause crisis. He is arrogating powers to himself, which is not good “