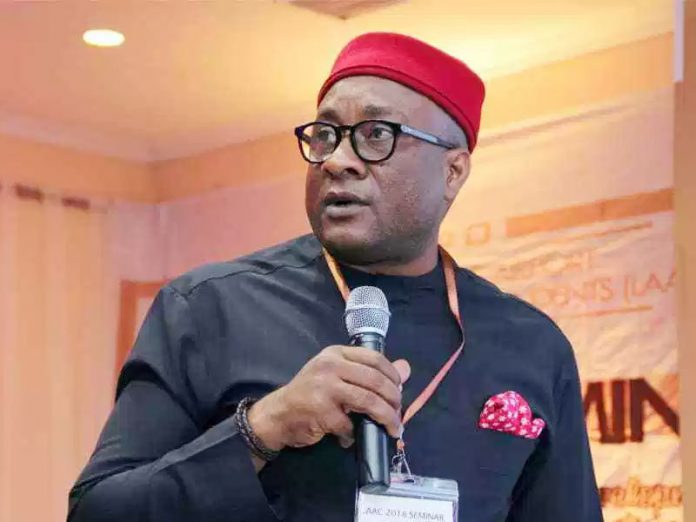 According to a report by The Nation, the Movement for the Actualization of Sovereign State of Biafra (MASSOB) has accused the Federal Government of Nigeria of being behind the plan to probe Air Peace Chief Executive, Allen Onyema by the Economic and Financial Crimes Commission (EFCC).

MASSOB also said the probe was not only a witch-hunt against the Air Peace boss, but a persecution against the Igbo race.

Leader of the movement, Chief Ralph Uwazuruike told journalists on Tuesday, while reacting to plan by EFCC to open a probe against Onyema, and the recent call by President Muhammadu Buhari’s Special Assistant on Social Media, Loretta Onochie asking Onyema to face his charges in the USA.

Uwazuruike said that Onochie spoke the mind of the presidency, but warned that Igbos will rise against any plan to humiliate Onyema.

“There are lots of prominent people in this country whom the civil society organisations have even petitioned the EFCC against over alleged money laundering and the commission has not probed them” he said.

Uwazuruike, who is also the leader of the Biafran Independent Movement (BIM), alleged that the probe was masterminded by federal government, but added that it will be heavily resisted by Igbos.

It would be recalled that the EFCC last Saturday set of a special panel to probe the allegation of $44.9 million wire fraud and money laundering against Onyema.

But Uwazuruike insisted that the allegation of fraud against the Air Peace boss was a calculated attempt to continue the alleged persecution of the Igbo race.

He said “I am an Igbo and it is my responsibility to defend Igbos which Onyema is one of them and I tell you that I have all is takes to resist FG from persecuting my people.

“We have been pushed to the wall by the federal government and Onyema’s case will prove a point, so he should not be intimidated and must remain firm”, he said.