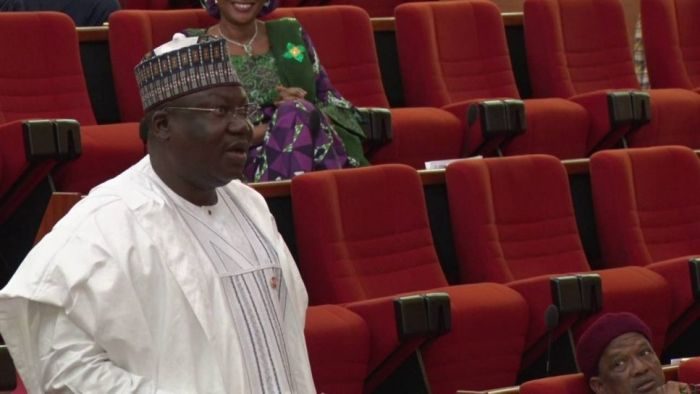 President of the Senate, Ahmad Lawan, says the video of a lawmaker, Senator Elisha Abbo (Adamawa North), assaulting a woman in a sex toy shop remains an allegation until investigation is conducted.

According to a closed-circuit television (CCTV) footage obtained by Premium Times, Abbo assaulted the woman after she supported the shop owner whom the lawmaker had accused of insulting him.

Speaking at plenary on Wednesday, July 3, 2019, Kaduna state lawmaker, Senator Uba Sani, said Abbo’s action could have a negative effect on the Senate.

“Some of us have spent most of our lives defending and fighting for the rights of less privileged and most especially, the youth and women. I therefore call on this senate to take a decisive action to redeem the image of this Senate,”

”It was an extremely tragic news but we cannot afford to be sensational about it. Nigerians must also be able to see us as people who are willing and ready to lead by example. As much as we must ensure that our colleague suffer for what he did not do assuming without considering that he didn’t do this.

“On the other hand, we must be able to protect the right of the Nigerian who has been violated. What we saw is a clear violation of sections 33, 34 and 35 of the constitution of the Federal Republic of Nigeria which provides respectively for the right to life, right to dignity of human person and right to personal liberty.

“I believe there is a need for the senate to set up and ad hoc committee to thoroughly investigate this issue and give each side a fair hearing so that to the public and our own conscience, we would be able to ensure that justice is not just dispenser but that it is done transparently,”

Senate minority leader, Enyinnaya Abaribe, also called for an investigation into the matter.

“Whatever behaviours we exhibit inside here, it is assumed that we should do the same outside. We are privileged Nigerians. That means that of you are privileged, it comes with responsibilities.

“I want us to suspend judgement until we can investigate this matter further. That will be in the interest of justice to all and to Nigerians who look up to us to show good example,”

In his remarks, Lawan said the Senate would not condone any act of violence.

”Whatever we saw (in the video) remains an allegation and until we investigate and find out what happended… both parties will have a fair hearing,”

“This morning, I received a lot of calls about the incident. I believe that this senate will be responsive. We cannot condone any act of violence by anyone. If there is an allegation against any of us, we must ensure that justice prevails.

The committee would be chaired by Senator Sam Egwu. Other members of the committee are Oluremi Tinubu, Matthew Uroghide, Stella Oduah, Dauda Haliru, Danladi Sankara and Mohammed Sani.